Thatch is a tightly intermingled layer of living and dead stems, leaves and roots which accumulates between the layer of actively-growing grass and the soil underneath. Thatch is a normal component of an actively growing turfgrass. As long as the thatch is not too thick, it can increase the resilience of the turf to heavy traffic. Thatch develops more readily on high-maintenance lawns than on low-maintenance lawns.

An excessive thatch layer (more than 1″) can restrict the movement of air, water, fertilizer and other materials to the roots. This air- and water-impervious layer causes the grass to restrict rooting to the thatch layer to get air and water and, hence, reduces drought resistance in the turf.

Furthermore, if the thatch dries out, it cannot be re-wetted easily. Even if the thatch stays moist, it can harbor fungi which can cause turf diseases. When temperature and moisture conditions are right, a disease infestation can kill the already weakened turf. The overall effect of a thick thatch layer is an unthrifty lawn which does not respond well to management practices and is easily injured by adverse weather conditions and pests.

The major causes of thick thatch accumulation are management practices that reduce the population of organisms which decompose thatch and/or that cause plant material to build up more quickly than the microorganisms present can break it down.

Research has shown that earthworm and microorganism activity play a vital role in preventing excess thatch accumulation. Good aeration, soil pH around 6.5 and adequate moisture favor the build-up and activity of beneficial microorganisms.

Thatch problems have been noticed more often in acidic and compacted soils, as a healthy microorganism population does not flourish under these conditions. Unbalanced fertilization and indiscriminate use of fungicides and insecticides are the most detrimental to beneficial organisms in turf.

Too much nitrogen can promote disease development. High-nitrogen fertilizing speeds up lush, succulent growth that is more prone to insect pests and disease. Moreover, many disease-causing fungi can live on cut clippings as well as on living grass plants. These clippings are then added to the thatch layer that harbors disease organisms until the environmental conditions are right for disease development.

Leaving grass clippings on the lawn, however, does not necessarily cause an increase in thatch buildup. Leaving short clippings after mowing does not add to thatch development— soil microorganisms break the clippings down quickly and return a valuable source of balanced nutrients back to the turf.

Proper management practices, therefore, promote healthier turf that will need fewer pesticides and can maintain a healthy population of beneficial organisms. Grasses which produce a large amount of side shoots, such as Kentucky bluegrass (produces rhizomes) and creeping bentgrass (produces stolons), tend to produce thatch readily.

Identifying the presence of thatch 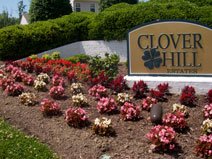 If your lawn has a bouncy feel to it when you walk on it, thatch is probably building up. As a general rule, plan to dethatch your lawn when the thickness of the thatch is more than 1/2″ deep. To determine the thickness, remove a small square of your lawn to a depth of about 3″ and measure the brown layer between the grass blades and the soil surface. Note the spongy layer of material above the mineral soil. If this layer is more than 3/4″ — 1″ thick when you compress it, you should consider having your lawn dethatched or beginning a management program which will encourage thatch decomposition.

How do you dethatch a lawn?

When thatch has accumulated to an excessive thickness, it is best reduced by mechanical means. Dethatcher machines known as vertical mowers, verticutters, dethatchers or power rakes have vertically spinning blades which pull some of the material to the surface as they slice the thatch layer. Most equipment rental outlets have dethatching machines available for renting. Mechanical dethatching should be done in either late summer or fall when cool weather prevails.

Caution! DO NOT attempt to remove the entire thatch layer in one treatment; DO NOT dethatch when soil is wet; only dethatch your lawn when it is needed rather than on a routine basis.

In addition to dethatching, the lawn should be aerated and limed if necessary. Lime and aeration stimulate bacterial decomposition by improving air, water and nutrient relationships. Some garden centers and equipment rental companies rent aerators.

You can also topdress your lawn after dethatching with about 1/8″ of topsoil similar to the soil underlying the turf. Top dressing helps even out bumpiness and fill in holes left from dethatching and/or aerating.

Top dressing is usually only necessary in special cases, however, and using the wrong top dressing material can be more detrimental than the benefit of evening a bumpy turf area. Do not topdress with a different type of soil. A dissimilar soil will not mix well enough with the underlying soil.

Other maintenance practices that discourage thatch build-up include frequent mowing to maintain the grass at its proper height, keep grass clippings on the lawn, reducing nitrogen fertilization and amending the soil with phosphorus, potassium, and lime according to a soil nutrient analysis.